Womenite organised an awareness program on ‘Menstrual Hygiene’ at 3 different centers in Delhi with over 200 women under the banner of “Beti Bachao Beti Padhao” . Participants were told about the myths and facts related to menstruation. The session was an interactive one where females took interest, shared their experiences as well as their thoughts about the kind of secured future they dream for their daughters. The session got concluded with the distribution of pads and some refreshments among the participants. Womenite believes that to start a conversation is to step from ‘Anxiety’ onto ‘Confidence’ as Education and Awareness – be it about periods or any other thing across the globe , CHANGES EVERYTHING. 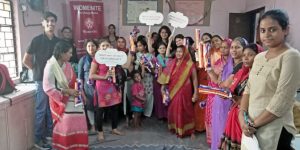 Why to restrict the idea of menstrual hygiene only to the day of its celebration ? Indeed it is celebrated to remind all of us about our roles in improving the current scenario of the society. Unfortunately in many areas there is complete neglect of menstrual hygiene due to low awareness levels and lack of access to sanitary products. So now the question arises that “what does a ‘ she ‘ do when she can’t afford pads ?” Keeping in mind all these major issues Womenite conducted a workshop near Nizamuddin Dargah , Delhi also with a group of approx 30 girls. We also discussed some untouched topics like ‘body’s nutritional needs during menstruation’ , ‘discussion on wash facilities’ , ‘problem and taboos surrounding menstruation’ and much more. Conclusively sanitary pads were distributed as an ‘expression of hope’ . Though the colour of the pads were white but it actually helped to strengthen the colourful dreams of those little girls who now might be feeling way more confident. 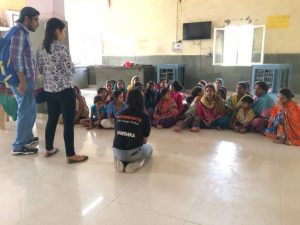 “A really high percentage of women told that they didn’t know about menstruation before their first period, so they felt horror , shock and many of them even thought they were dying or that something was really wrong with them.” If you talk to young women across a whole range of different cultural groups regarding their major concern about menstruation, it is its CONCEALMENT ! Coming on to the awareness program organised on 28th of May at ‘KHUSHI RAINBOW HOME’ on the occasion of menstrual hygiene day, Womenite aimed at breaking this very concealment by broadening the horizon of people’s mind through DISCUSSIONS and DEBATE. A group of 50 to 60 girls participated in this event where they were told about the common myths related to periods. Pads were distributed and facts were shared with the girls about ‘Menarche’ (the first occurrence of menstruation in a women). Along with the distribution of refreshments the workshop was concluded with the message that “NO BLOOD SHOULD HOLD US BACK” as the necessity of managing menstruation and society’s response to them, both are linked with WOMEN’S RIGHTS and GENDER EQUALITY. 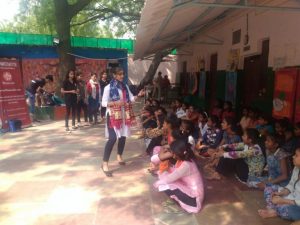