The use of ‘menstrual huts’ to banish women from their homes has been criminalised by the Nepalese Parliament after a unanimous vote on Wednesday. 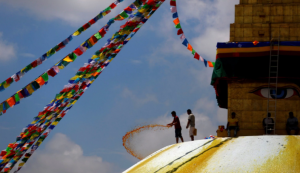 The new law that will come into effect next year stipulates a three month jail sentence or a 3,000 rupee fine (£23.10) for anyone forcing a woman to follow the custom, known as “chhaupadi”, which forces menstruating women to sleep in huts away from home.

“A woman during her menstruation or postnatal state should not kept in chhaupadi or treated with any kind of similar discrimination or untouchable and inhuman behaviour,” the new law states.

Linked to Hinduism, chhaupadi stems from the belief that women are untouchable when they menstruate, as well as after childbirth.

Women are banished from the home and barred from touching food, religious icons, cattle and men. They are also forced to sleep in huts known as chhau goth.

The basic huts can be dangerous, posing health risks including pneumonia and snake bites.

A month before the law was passed, a teenage girl died after being bitten by a snake while sleeping in a chhau goth hut.

Read the full article by the Telegraph here: http://www.telegraph.co.uk/news/2017/08/09/nepalbans-use-menstrual-huts-banish-women-homes/